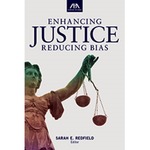 This book helps explain how many who pride themselves on being fair can be part of a system which is widely seen as unfair by those who have historically been victims of bias and prejudice. The central focus of the book is on the different approaches that courts can use to lessen the impact of implicit bias by “breaking the bias habit.”

bias in the legal profession;